During the previous two weeks I have been implementing a trust-region Sequential Quadratic Programming (SQP) method. This method is able to solve the equality-constrained nonlinear programming problem:

Ideally at each iteration this method would solve the following trust-region quadratic programming (QP) subproblem in order to compute the step update $p_k$:

Note that this problem may not be feasible, since the linear constraints may not be compatible with the trust-region constraints, as illustrated in the figure bellow: 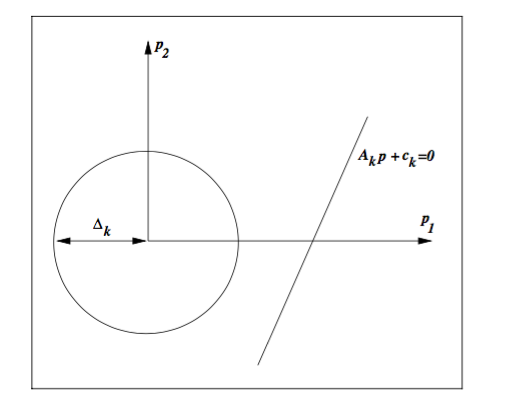 To resolve the possible conflict between the linear constraints and the trust-region constraints, it is not appropriate simply to increase the trust-region until the step satisfying the linear constraints intersects the trust region. This approach would defeat the purpose of using the trust region in the first place as a way to define a region within which we trust the model to accurately reflect the behavior of the objective and constraint functions. Analytically, it would harm the convergence properties of the algorithm.

A more appropriate viewpoint is that there is no reason to satisfy the linearized constraints exactly at every step; rather, we should aim to improve the feasibility of these constraints at each step and to satisfy them exactly only if the trust-region constraint permits it.

The Byrd-Omojokun approach [4] to deal with the incompatibility of the linear constraints is to modify the QP subproblem allowing more flexibility. This approach solves the subproblem:

where $r_k$ is adjusted such that the constraints are always compatible. This problem is solved in a two steps procedure:

Both substeps are solved in rather economical fashion using efficient methods to get an inexact solution to each of the subproblems. The first step is solved using a variation of the dogleg procedure (described in [2], p.886) and the second step using the projected conjugate gradient algorithm described on the previous blog post (link)

There are a few points about this algorithm that deserve some attention. The first of them is that while the solution of the trust-region QP subproblem doesn’t gives a way of calculating the Lagrange multipliers $\lambda_k$, these Lagrange multipliers are still needed in order to compute $\nabla^2_{xx} \mathcal{L}(x_k, \lambda_k)$.

An approximation of those Lagrange multipliers is obtained minimizing a least squares problem, as described in [1], p. 539. The basic idea is to try to select the Lagrange multipliers such that the first-order optimality condition: \begin{equation} \|\nabla_{x} \mathcal{L}(x^*, \lambda^*)\| = \|\nabla f(x^*) + A(x^*)\lambda^*\| = 0, \end{equation} is satisfied as closely as possible on a given point $x_k$ (That is not necessarily optimum). This is done by selecting $\lambda_k$ as the solution to the least squares problem: \begin{equation} \min_\lambda \|\nabla f(x_k) + A(x_k)\lambda\| = 0. \end{equation}

Another important element of the algorithm is the merit function: \begin{equation} \phi(x; \mu) = f(x) + \mu \|c(x)\|. \end{equation} It combines the constraints and the objective function into a single number that can be used to compare two points and to reject or accept a given step. The penalty parameter $\mu$ is usually update through the iterations and it is important for the global convergence of the algorithm it to be monotonically increasing. Some guidelines about how to choose it are provided on [2], p.891.

The algorithm basic steps for a single iteration are summarized next:

Next I present the results of the implemented solver on the test problem ELEC from the CUTEst collection.

This problem is described in [3], problem 2, and consist of given $n_p$ electrons, find the equilibrium state distribution (of minimal Coulomb potential) of the electrons positioned on a conducting sphere.

The performance of other commercial solvers (according to [1]) is presented on the table bellow: 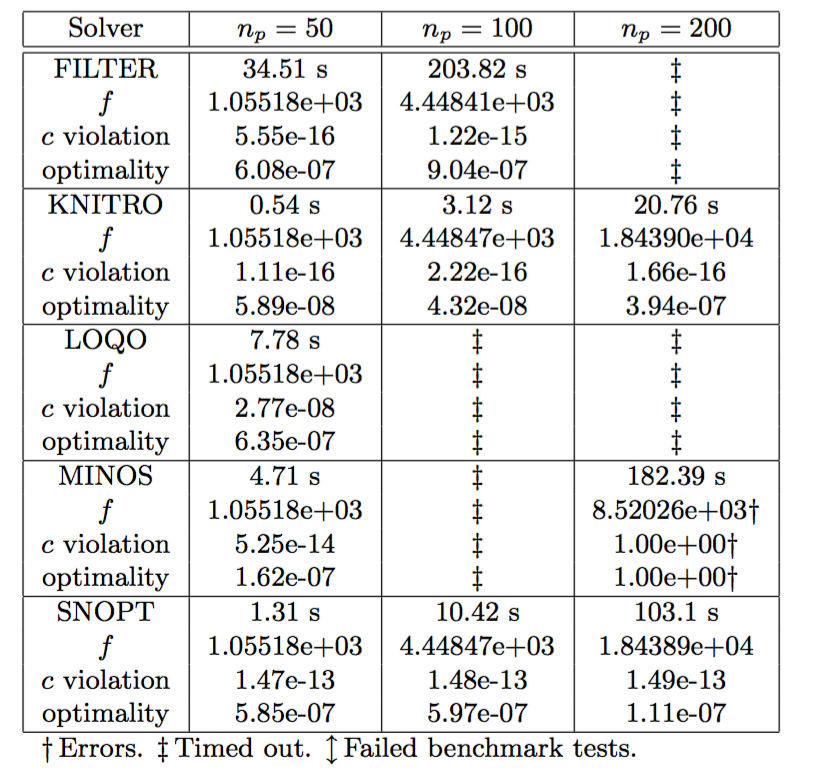 I choose this problem because the KNITRO package performs well on it, so our solver is expected to perform well on it as well, since the underlying principle is the same.

For $n_p = 200$ the performance of our implementation is:

The execution time is very competitive and the final value of f seems very close to the one obtained by the KNITRO package. The constraint violation also seems to be ok.

The norm of the gradient of the Lagrangian $\|\nabla_{x} \mathcal{L}(x, \lambda) \|$ should be zero at the solution point and is used as a measure of the optimality along the iterations. It is displayed on the graph bellow: 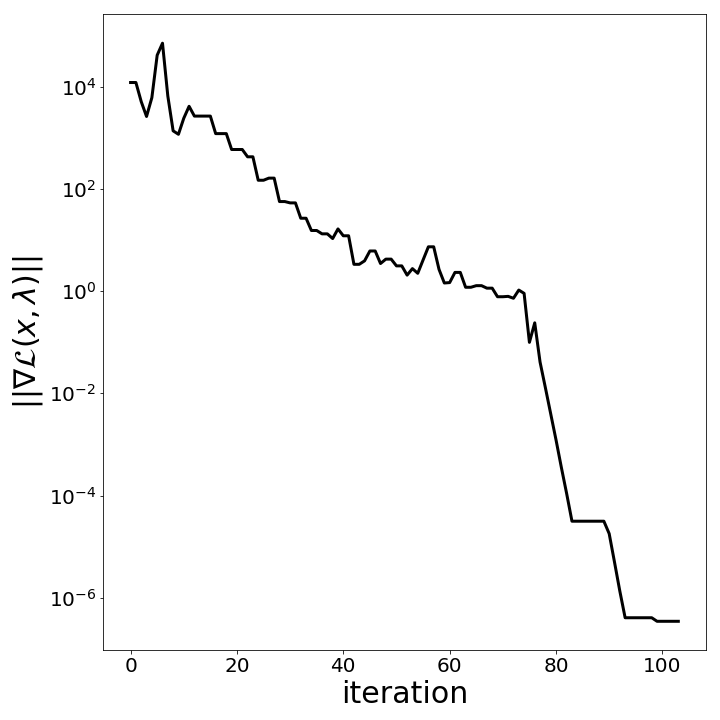 The decay of this optimality measure seems consistent along the interactions.

This SQP equality constrained solver is one of the elements of an interior points method that will be described in the following posts.

[4]    Marucha Lalee, Jorge Nocedal, and Todd Plantenga. “On the implementation of an algorithm for large-scale equality constrained optimization.” SIAM Journal on Optimization 8.3 (1998): 682-706.